Somali Family Services (SFS) believes that every Somali has a stake in the country’s security and development. 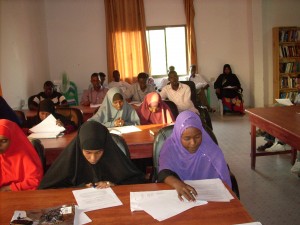 Therefore, since its establishment in 2003, SFS has been committed to engaging and empowering those groups typically excluded from discussions and decisions that affect the fate of all Somalis. These groups include:

Youth
The exclusion of youth from decision-making roles, along with their lack of education and job skills, creates an environment ripe for violence. Because many of Puntland’s youth lack employment opportunities and see no alternative means of having their voices heard, they are especially vulnerable to being recruited by gangs, pirates, armed militias and other criminal groups. Recognizing the precarious place youth inhabit in Somali society, SFS carries out programs designed to engage youth in constructive ways. These programs encourage youth to find employment, gain practical skills, and share in the decision-making processes of their communities.

Women
Traditionally, women possess second-class status within Somali society. They do not usually partake in decision-making processes, and their rights are all too often violated. Recognizing that Somalia can only reach its true potential when women are empowered to meaningfully participate in all societal domains, SFS aims to provide women with the tools they need to ensure their voices are heard by their families, communities and governments. To accomplish this, it ensures that at least one-third of all participants in its trainings and forums are women. These women are engaged in the same skills and knowledge as their male counterparts, in a safe environment where their contributions and inputs are respected equally. SFS also hosts human rights workshops to bring women’s rights and related issues to the attention of community members.

Girls
In addition to ensuring that girls form almost half of all participants in its youth initiatives, SFS has also implemented programs specifically targeting Somali girls.

For example, it led a leadership training that aimed to empower 30 young women in Qardo with the skills and confidence needed to be movers and shakers within their communities. SFS also works to inform Somali girls of their rights for which they are entitled to demand respect from government, such as the right to education.

Internally Displaced Persons
IDPs are especially vulnerable to human rights abuses and often lack basic services and opportunities for employment in their host communities. In order to empower IDPs to have their voices heard and their unique concerns addressed, SFS trains IDP representatives on human rights and advocacy. SFS has also hosted forums that provided IDPs with the opportunity to meet government officials and communicate their needs directly.

In addition to working directly with these groups, SFS regularly offers the Puntland Library & Resource Center as a safe space for other civil society organizations (CSOs) to carry out work also aimed at assisting marginalized individuals. In all of its programs, SFS helps ensure that marginalized groups have a say in and benefit from the political and economic development of Puntland.