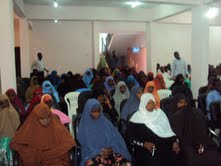 Puntland, Somali Family Services (SFS) strives to build and strengthen the capacity of the Puntland government, civil society organizations (CSOs), and local religious and secular leaders. SFS works daily to empower citizens, as well as to help the Puntland government become responsive and accountable to the needs and demands of local communities.   To achieve this, SFS has held a variety of training exercises, workshops and forums. It has provided computer training for half of Puntland’s Members of Parliament, affording them the skills to better write legislation, make informed decisions and better provide services to their constituents. This training and similar capacity building programs for government officials have strengthened SFS’s relationship with the local, regional and Puntland governments. SFS utilizes these relationships to open up dialogue on critical issues among citizens, civil society and government officials.
A strong, responsive government requires an informed, active citizenry. To this end, SFS helps improve the abilities of CSOs to aggregate and represent citizens’ interests through capacity building trainings, workshops and forums with government officials. Furthermore, in Puntland SFS launched its Neighborhood Colleges, a leadership and civic development program designed to help citizens learn about local government, democratic processes, and rights and responsibilities.  By bringing together government officials and representatives of CSOs for discussions about human rights, democratization and the future of Puntland, the Neighborhood Colleges have helped build bridges between these two often-opposing forces. During Neighborhood Colleges meetings, government officials explain their roles and responsibilities to participants; describe how their day-to-day activities benefit the community and participants; and take questions and requests from the participants. As such, these dialogues open lines of communication between government officials and their constituents, fostering accountability and responsiveness.
SFS also understands the importance of empowering Somali citizens and ensuring they have a voice in their society and government. To support citizen empowerment, in Puntland SFS worked to divide Garowe, the capital city of Puntland, into seven neighborhoods and subsequently created committees for each one.  Members of these neighborhood committees are responsible for serving as liaisons between their communities and local authorities, and are also community organizers in their own right. Among other accomplishments, the committees have organized security patrols to monitor their neighborhoods at night, performed a poverty census, and collected and distributed food to the needy in their communities.