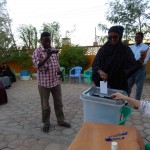 Voter education initiatives are in full force across Puntland in preparation for the upcoming elections.  On July 15th, Puntland will conduct its first municipal elections since the region’s inception in 1998.   Voter education groups are confident that a successful election will occur based on the positive reception they have received during their trainings.
Several INGOs are leading the voter education drive in coordination with the Transitional Puntland Electoral Commission (TPEC), including the Garowe-based Somali Family Services (SFS).  SFS has coordinated voter education seminars throughout Puntland, leading forums in 50 remote villages attracting at least 40 participants each.  SFS also has conducted 19 larger district forums and has presented in four regional capitals: Galkayo, Buuhoodle, Boocame and Garowe.  Attendance at urban workshops has exceeded 80 participants on average, with some gatherings attracting over 160 individuals.   Moreover, a variety of media outlets have helped spread basic voter information beyond the presentations through radio, television, billboards and print.

While initial feedback reported apathy and disinterest among Puntlanders regarding the election, recently volunteers have described a more favorable reaction and hopeful excitement among participants.  Brightly colored election brochures, stickers and posters have appeared on buildings, shops and cars depicting the voting process.  One consistent finding across all workshops has been that Puntlanders overwhelmingly reject “clan politics” – an auspicious discovery before the election.

Unfortunately the days running up to Election Day have not been marked by peace and tranquility.   Following a recent political rally organized by Horseed Political Association in Galkayo, armed assailants and Puntland Police engaged in a battle that left four people dead and fifteen wounded.  However, violence seems to be contained to isolated incidents and not indicative of popular perception heading into the election.

Election officials are confident of a peaceful start to the democratic process and do not foresee excessive conflict on Election Day.  “I recently met an elder who told me about his only experience voting in the 1960s,” said Abdirizac Shire, SFS program director.  “He was overjoyed about the opportunity to vote again and have a political voice.”

There will be 525 polling stations available in 33 of the 37 Puntland districts.  Voting booths will be open to all Puntland residents from 6 AM until 6 PM on Monday, July 15, 2013.   TPEC and SFS encourage all native Puntlanders to check their local district councils or the TPEC website for specific polling station locations near them.