An event that was aimed to promote and empower Female journalists in Nugaal region was on Monday evening held in Puntland Library and Resource Center. The event was organized by SFS Media and Peace building institute (Radio Sahan), Ministry of Information and Culture and Association of Female Journalists in Puntland. The event was attended by the outgoing Minister for Information Hon. Ahmed Shiekh Jamac, The New Deputy Minister, female journalists and other journalists.

After words of prayer from Mr. Abdirizaak Garaad, the event was opened by the Chairperson of the Female journalist Association Mrs. Fatuma Mohamed Mohamud who welcomed everyone for the wonderful turn out for the event. She thanked S.F.S Media and Peace building Institute and Ministry of Information for their support to Female journalists. Mrs. Fatuma narrated the feeble situation of the Female Journalists association, the many challenges that face them. She said that as female journalists, they also carry the perception they hold being weak group of the society. This challenges them to compete with their male counterparts in the journalism field that demands aggressiveness and strength.

“We face a lot of problems as female journalists and it is not easy for us to do our job as required. We found it was good to start and form an association that will be an umbrella of female journalists that defends our rights and unites.”

She concluded by thanking the former minister for Information Mr Ahmed Shiekh Jamac for his tireless efforts to work closely with them and respond to their grievances evrytime they needed him.

The Director SFS Media and Peace building Institute (Radio Sahan) of Somali Family Services, Ahmed Hussein who also spoke at the event welcomed the attendants. He explained the Importance of supporting such event was to support and empower female journalists in Nugaal region. He said MPI addresses the challenges faced by all journalists working in Somalia especially in Puntland. He asserted the expressions by the chairperson Mrs. Faduma that indeed female journalists require special rights for them to fit to the journalism field. Mr. Ahmed emphasized on the need of recognizing the effort by all journalists in participating in state building as part of bringing back and recovering Somalia State 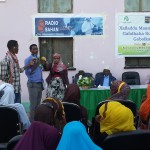 “Our priority is to support the media in Somalia especially in Puntland, our aim is to stand with media outlets and its practitioners and promote collective advancement at the practical and structural levels throughout Somalia. Though SFS and MPI are based in Garowe and its programming has been limited to the Puntland region, the MPI will work in all regions of Somalia. We believe the peaceful future of Somalia depends on the cooperation and unity of each region in every sector. The media provides a critical voice in state and peace building efforts and can greatly influence the state of progress.

However the director encouraged the journalists to promote peace in their work and heed the fragility of the state. He also encouraged them to promote democratization process which Puntland is seeking.

“We want to encourage unity and democratization through a unified and independent media sector all across the nation. Additionally, in order to achieve the freedom of speech and expression endowed to media, Somalia media houses must work together to support, advocate, and protect one another against corruption and intimidation.” 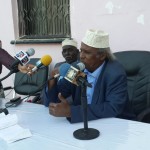 The outgoing and acting Minister for Information Hon Ahmed Shiekh Jamac who was welcomed to the platform talked on his part on the situation of the female journalists. He echoed the statements by the Chairperson; Mrs. Fatuma and urged the new ministry to look into the problems of female journalist more specifically.

“There is a reason why they felt they should have their own umbrella while there is Media association of Puntland, (M.A.P) they face specific problems that need to be noted, I request you (new deputy minister) to provide them with extra time and effort to attend to their problems.’’

Hon Ahmed sheikh Jamac welcomed and introduced the new deputy minister, Dr Nur Ahmed Yasiin who thanked SFS MPI for having inviting him to the event. He applauded the female journalists with the good idea of uniting in order to discuss their problems and overcome their challenges. He said that he will be there to support the association and will be keen to listen to them.

“I understand that female groups always have more challenges as compared to the male groups, but I will put more effort in bringing forth the solution to their needs God willingly. 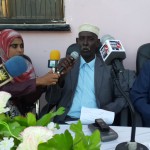 The new deputy minister for Information Dr Noor Ahmed promised to support and address the problems of the female journalists.

SFS Media and Peace building Institute held this event a time when Puntland President Proff. Abdiweli Mohamed Ali Gaas has not yet appointed the full minister of Information and Culture. The Media associations and Puntlanders at large are asking themselves what is taking it long for the President to name the ministry.