SFS raises its profile in Nairobi 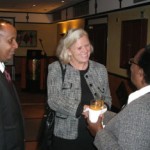 One year after opening its liaison office in Kenya, Somali Family Services brought its partners and friends together for a reception at the Serena Hotel in Nairobi to raise awareness about its contributions to the political and social development of Puntland, Somalia. At the reception on 17 June 2011, those close to SFS’s work learned more about the variety of its programming, while newer friends who were less familiar with the organization’s work were introduced to SFS’s Puntland Library and Resource Center, human rights trainings, youth empowerment initiatives and much more.

Puntland Liaison Officer Mohamed Hassan Barre kicked the program off by welcoming guests and thanking them for their work with SFS to help rebuild Puntland. In addition to SFS’s presentation about its mission and projects, Stephen Ndichu from Diakonia and April Powell-Willingham from UNDP spoke about their long-standing partnerships with SFS, praising the organization’s past work and calling on others to help support SFS’s future endeavors.

SFS hopes that by having showcased the breadth of its work and presenting testimonials from individuals who have collaborated closely with the organization, it will be able to forge mutually beneficial relationships with the 25 organizations whose representatives attended the event.