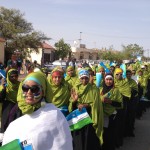 Last month, in the highlands of Papua New Guinea, a 20-year old mother of two was stripped naked and tortured until she confessed to practising sorcery. Then she was burned alive on the local rubbish dump in front of a crowd of fellow villagers.

Although horrific, this event was not unusual. The Constitutional and Law Reform Commission of Papua New Guinea has estimated that as many as 150 people accused of sorcery — mostly women — are murdered every year in just one of the country’s 20 provinces. Before they are killed, many suffer prolonged, public and often sexual torture. Two things made last month’s murder exceptional: it led to public outrage, and two alleged perpetrators have been arrested.

Last month, three sisters aged 5, 9 and 11 living in a remote Indian village were raped, killed and flung down a well. Initially the authorities failed to react — but after villagers blocked a highway in protest, the police belatedly began an investigation.

Last month, in South Africa, a 17-year-old girl was found horribly mutilated on a building site. She had been gang raped, and died hours later. Her alleged attackers were tracked down and arrested — after an unusual wave of public protests.

In recent weeks, in three countries that have few features in common, pervasive indifference to violence against women has – at least momentarily – given way to outcry. Public demands for action to end the routine atrocities so often experienced by women and girls have inspired government leaders to make important statements of intent, and stung apathetic police forces into launching investigations.

Outrage is contagious. It was the gang rape and murder of a 23-year-old physiotherapy student in New Delhi last December that unleashed what may yet become a sea-change in public attitudes towards crimes of sexual violence in India. This wave of public repugnance has spread, not just within India and to neighbouring countries, but further afield — including to South Africa, where the New Delhi rape was cited by activists who asked why South Africa’s chronic sexual violence generates so little public anger.

Violence against women is one of the most pervasive violations of human rights. And yet the authorities responsible for protection and prosecution too often meet such acts with indifference.

It is not enough simply to pass legislation. Almost every country in the world has some kind of relevant legal framework in place. Governments know they have an obligation under international law to prevent these crimes by working to eliminate underlying attitudes that discriminate against women and girls. Yet, in many countries, politicians, police, the judiciary and ordinary men — and women too — collectively shrug and look away when they hear of rapes and other sexual or gender-based crimes.

Temporary outrage is not enough. Serious investigations into violent acts against women should become the norm, not just something police forces do when the media highlight a particular case.

We need to shake this global torpor and wake up to reality: every minute of every day, on every continent, women and girls are raped and abused, trafficked, tortured and killed. This doesn’t just happen in far-away conflicts. It happens in sophisticated capital cities, as well as in small towns and villages and the house next door.

In January, the report of the Verma Committee in India proposed sweeping reforms, including vigorous punishment for marital rape, domestic rape and rape in same-sex relationships; requiring police officers to register every case of reported rape and ensuring those who fail to do so face serious repercussions; ensuring accountability of police or military personnel for sexual violence; punishing offences such as stalking and voyeurism with prison terms; changing the humiliating protocol for medical examinations experienced by rape victims; cracking down on extra-legal village councils, which often issue edicts against women; and legal and electoral reforms to ensure that people charged with criminal offences may not hold political office.

These recommendations require serious and sustained follow up. They can also serve as a model for other situations.

In the past month, the world has seen how street movements can help seek redress for the three young daughters of a poor Indian villager; a teenager in a suburb of Cape Town; a girl accused of “bewitching” her neighbour on a remote Papua New Guinean mountainside; and a student thrown naked off a moving bus in India’s capital.

We must not allow this attention to fade. We need more pressure on political leaders, to bring about serious and lasting change of the type proposed by the Verma Committee. Each country will need to find its own response to ensure accountability for sexual and gender-based crimes. But continuing to turn our backs on what is happening to millions of women across the world is not the answer.